A new report out of Yale University and published in Nature concludes that, globally, there are over 3 trillion trees alive today! This figure, they say, is substantially greater than the previous estimates of only 400 billion trees. However, the study also concludes that the world is loosing 15 million of these trees every year. Some really big numbers there, and given that measuring forests is actually one of my areas of research, I have had my 5 minutes of "fame" on national radio and TV talking about these numbers. 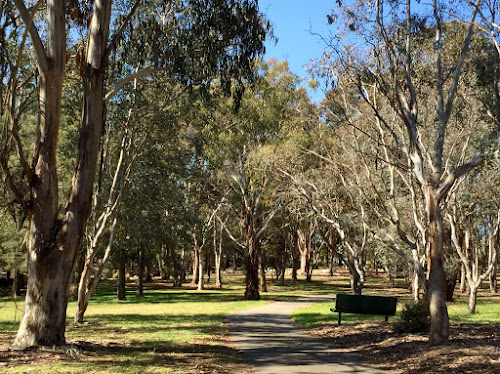 Is the beauty or the value of this scene related to the number of trees?

"How did previous researchers get it so wrong?" is the question I get asked, often with the follow up of "does this new information change anything?" Well, I am not entirely positive that the new estimate of 3 trillion trees is totally right either, but don't think details about non-normal error distributions and back-transformations would make anybody other than statisticians, biometricians or mensurationists sit up and listen - so I. Won't talk about that here. But if the differences between the estimates are real, it is probably more likely to be due to previous studies not being interested in the number of trees - they simply estimated that for completeness. "But why wouldn't we be interested in the number of trees?" I sense you asking. The number of trees is only useful when you know the size and distribution of those trees, so most previous studies have concentrated on estimating total biomass, carbon or volume of the trees and mapping that. These total values essentially are the result of multiplying number and average size together and so totals give you both in the one figure. A forest with 10,000 small trees may have the same biomass as another with only 800 large trees, so loosing 800 trees may be important in one forest but not in another. However, a forest with a large biomass will tend to have greater biodiversity, stored (sequestered) carbon and other ecosystem services than a forest with low biomass. Studies of isolated trees in farm paddocks and urban areas demonstrate that even a single tree of the right size and in the right place may have substantially greater value to ecosystem services, birds, animals and even aesthetics than hundreds of trees elsewhere. With trees, it is not always the case that not plus one equals two!

The number of trees also changes substantially in any patch of forest over time. In eucalyptus forests after a major fire, thousands or even tens of thousands of trees may germinate and race towards the heavens. However, as early as three years of age, these trees will start to compete and many will die so by about 80 years, there may only be about 500 - 800 trees left living. Then however, other types of trees (shade tolerant ones) might get involved and start growing underneath these surviving eucalyptus giants, so the number of trees start increasing again. Given enough time, those original eucalypts will die of old age or wind and fire damage (number goes down again) which might allow a whole new race of young trees for the heavens (increasing the number). While the number of trees goes up and down through this natural sequence, the total biomass and even the total biodiversity tends to always increase. So, it is better to measure biomass than number of trees because it is more closely related to what we really want to know about, and it is also easier because we don't have to worry about the noisy increases and deceases in number through time.

So, was there any advantage in undertaking and publishing this study on the number of trees? It may be simply that people have a better understanding for numbers of a count of trees rather than the area in hectares of forest or the biomass in tonnes. People might be able to connect better with the idea of 15 million trees being lost each year to agriculture whereas they cannot come to terms with thousands of hectares undergoing land use change. People in general are not too good at estimating area once it gets beyond, say, a football field (do you know how big a football field is?). We may be even worse when estimating weights - how many tonnes is a Blue Whale, so how many equivalent Blue Whales are cleared for agriculture this year? On the other hand, do you really appreciate how many zeros there are in a Trillion?

The Nature article itself stated that civil societies resonate with programs like the "Billion Tree" or even "Million Tree" urban planting goals, so putting a count of the number of trees might help civil society to comprehend the size and importance of the forest. This is probably the greatest benefit of the study - and certainly the reason I was invited to the TV and Radio for my bit of fame. Fame and civic awareness of forests are certainly good things even if forest ecologists, scientists and foresters wont really care about the final big number. 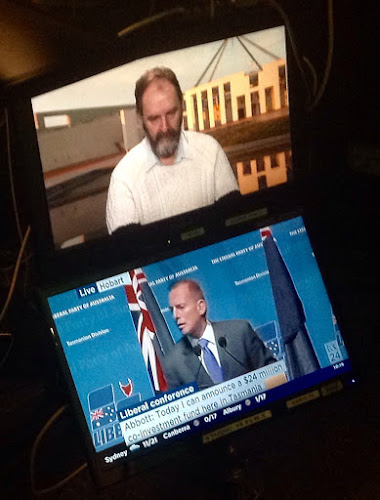 Me at the Canberra studio, waiting for the Prime Minister of Australia to finish so I can have my say on trees.
Posted by In Honour of Mencken at 15:27 4 comments: