Forestry in an Egg Shell

Eggs occasionally receive a bad rap. "Cholesterol death bombs" was one headline in the 1970's, and eggs are commonly identified as the source of salmonella poisoning scares even now. However, with the exception of badly prepared meals, eggs are seen as a healthy and sound food source, and certainly of superior value to artificial alternatives. Up until the late 1960's it was not uncommon for suburban households, even in a metropolis like Sydney, to run a few chickens around their backyard - great for dealing with table scraps, providing a regular source of wholesome breakfasts, and serving as the main course in the occasional celebratory dinner. Purchasing eggs in the shops during this time was relatively expensive, and getting a chicken to roast from the butchers was a Christmas or birthday treat. But in the 1970's, the "economies of scale"  were introduced to chicken and egg production. Suddenly, battery farms could produce eggs for market that were cheaper than raising them yourself and chicken -roasted or deep fried - became the mainstay of cheap "fast" food. Backyard coupes, no longer needed, disappeared as houses covered more of the block and our population feasted on cheap chicken and eggs.

I believe plantations are battery forests, the equivalent to the battery farm goal that focuses attention on cheap and intensive production of a good. It has taken a couple of decades, but the true costs of the transfer to battery farming have come home to roost (sorry - just had to use that pun!). Financial costs, health costs, social costs and moral costs. Battery farming is intensive and uses disproportional quantities of energy, water and nutrients compared to the traditional backyard coop. To control diseases in the crowded conditions, battery producers include "preventative" antibiotics, while mega-doses of vitamins make those saleable orange yolks. No doubt, battery produced eggs are still better for human consumption than many alternative foods, but despite the chemical and drug additions the battery eggs tend to be worse for health than backyard eggs. For example, battery eggs have higher levels of "bad" cholesterol levels compared to those produced by chickens free to forage for insects and grubs on the open ground. Chickens also taught generations of children about life, nurture and death - they were probably the original "birds" in the stories about the birds and the bees! Children learn even as they enjoy being around free range chickens.

The "costs" of the pain and suffering of the caged chickens has more recently come into the equation. More consumers are moving away from cheap battery eggs to demand "free range" and less morally stained eggs produced from chickens free to roam over hectares of land.

So, how does this relate to the forest? Centuries ago, forests were essentially the "back yards" of the human populations. With no intensive management, humans took their daily needs of fuelwood, building material and even foods from the extent of the forest. Children and their parents were linked into the natural world of life and death; birth or regeneration; and the complex interaction of the living things. The forest users were the forest dwellers and they saw how the forest grew, how it responded to damage, how it produced goods and services that could be treasured and safely used. Fast forward to the late 1900's when "battery forests" or industrial plantations were touted to replace the extensively managed "free range" forests. The children moved out of their backyards even as wood became cheap. Are we suffering the same sort of losses as experienced with the loss of the backyard chicken coop?

Like battery farms, battery forests use a disproportionate amount of water, nutrients and energy compared to the older "backyard" or extensively managed alternatives. Plantations have to grow fast to be a commercial success, and that means adding fertiliser and water. Now, legislation and regulations are in place in many states to limit where battery forests can be established and so minimise their use of ground water.

Our urban populations do not interact with these new forests and are increasingly isolated from the old forests so they no longer know how quickly a tree can grow or the conditions trees need to set seed and successfully regenerate. They no longer know which animals use what habitats provided by the trees, or even that these very habits change over time, growing and decaying with the tree. When backyards ceased to house chickens and compost heaps and places for children to learn and grow, these places were re-tasked, built over, or left to grow weeds and "store" junk. Will our forest lands suffer the same as children no longer walk through them or use them? Already the Australian Government's much vaunted "Green Army" is often reduced to cleaning up weeds and litter in the backyard forests that urban populations no longer care about or venture into.

But, don't get confused. The products from these plantations are still vastly superior to artificial alternatives just as any egg is better than junk or snack food. Wood as a building material, even from plantations, consumes far less energy to produce than plastic, steel or brick even while it stores carbon in a long-term pool. Paper produced from a plantation similarly is the result of less energy and pollution than paper produced from agricultural residues or non-biotic (and exhaustible) alternatives. Even fuel produced by plantations (fuelwood, biofuel) causes less damage than non-biotic sources, or sources that release the CO2 that was removed from the earth's carbon cycle millennia ago.

Unlike chickens, trees don't obviously look stressed when forced to grow in battery situations. But trees do suffer stress - growth stress. Eucalytpt trees in particular exhibit stress when grown quickly. This stress is 'released' once they are sawn into structural timber. But the release can be explosive with the boards twisting and bending, and ending up useless as a building material. In contrast, trees grown in the extensive backyard forests produce stronger and more attractive structural materials. 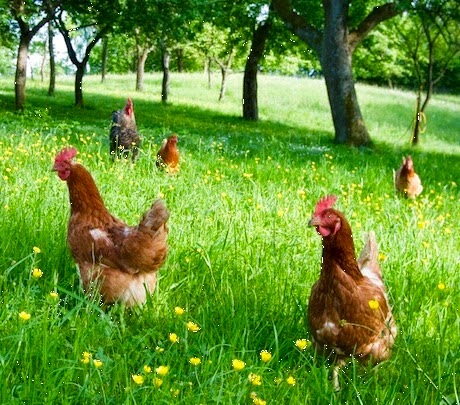 The cost of egg and chicken production has changed dramatically over time. The value of the product has also changed even while the production process cycled from extensive to intensive and back. But there will always now be a mix of the free range backyard and the battery chicken. Will the value of forest products and the process similarly change as management cycles from extensive to intensive plantations, and maybe back again? What is balance between extensively managed forests and battery forests, and how do we get there?
Posted by In Honour of Mencken at 20:20 1 comment: